HomearticlesTahchin,one of the most popular Iranian cuisine 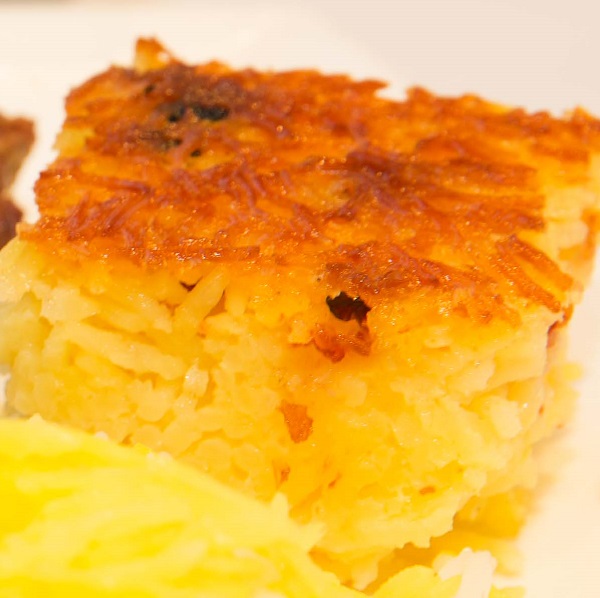 Tahchin,one of the most popular Iranian cuisine

All of us are familiar with this Tahdigi saffron Persian delicious dish. Tahchin is one of the most popular Iranian cuisine, which is commonly used in baking yogurt, rice, saffron and eggs.

This type of food is accompanied by chicken, meat, eggplant, etc.. In addition, some of the barberry is also used in saffron rice. Apart from the primary ingredients mentioned, other foods may also be added to this food to make it different from other types of feed. In fact, we are faced with a fairly wide variety of dangers. As a result, it’s hard for us to choose the most delicious ones.

In types of Tahchin You can use chicken, meat, meat and eggplant, spinach, fish, etc. However, chicken Tahchin is the most common type of Tahchin. In general, it can be said that the Tahchin has two main parts. One part of it is the Polo saffron that is seen along with the contents of food, such as meat, poultry, and the other is a plain white patch that covers the toxin. Usually in many restaurants and houses, the second part is deleted and you will only encounter saffron rice. Perhaps for that reason, the simple white chelow on the dot will seem unnatural to you.

Because of the presence of eggs and yogurt in the rice paddies, Tahchin It is a relatively heavy meal that will make people feel comfortable. This meal is commonly used in Iranian parties, because of its decorated appearance and mold, it will make the party more formal and more luxurious. Perhaps it can be admitted that this food is considered to be a type of Iranian cuisine due to its contents!

Tahchin is a nutritious food. In the first place, the presence of eggs in this diet causes vitamin A and D to be rich. The two vitamins strengthen the body’s defense system. In addition, vitamin B12 in the egg can also be a good alternative to those who do not eat a lot of meat.

Since Tahchin-e morgh (chicken) has more fans, it’s not bad to know that the chicken breast used in this diet contains vitamin B3 that has antioxidant activity and helps to regulate blood sugar and energy production.

In relation to Zereshk in Tahchin, you also need to know that it is a nutrient, anticancer and seizure that eliminates vitamin C deficiency. However, it is advisable not to overdo it; excessive consumption of Zereshk will lead to hypotension, itching and nausea. In addition, people with a history of kidney or bile marrow are advised not to take this food because they will exacerbate their problem. In addition, Zereshk is considered a kind of uterine stimulus. This often prompts pregnant women to refrain from eating this food.

Since Tahchin is very little used in Tahchin, it can be considered one of the healthiest foods and of course suitable for those who are overweight or want to reduce their weight. It is recommended to cook it in order to make the oil used in Tahchin as low as possible. The work does not tarnish badly! To have a healthy Tahchin, it should be said that it is best to change the yogurt used in Tahchin to a low fat diet and boil the chicken that you use in the meal to enhance its quality.