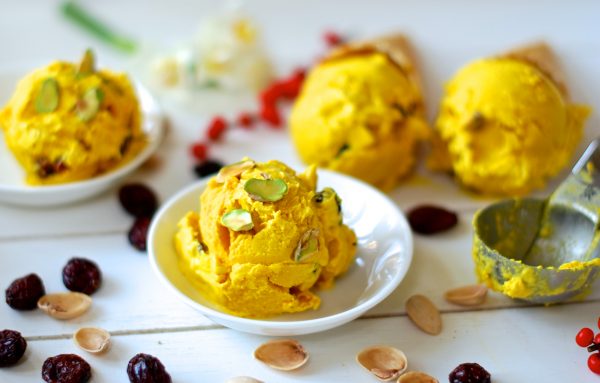 One of the most popular desserts in the world and Iran is ice cream. The only dessert that can be enjoyed even in  frosty winter.

Ice cream is a frosted and delicious dessert containing at least 10% milk fat and sugar.

The first ice cream shop in the world was the one that began in New York in 1776.

The arrival of the first ice cream in Iran goes back to the travels of courtiers abroad.

Ice cream produced in the world uses all fruits and is naturally produced. Some people like ice cream that comes in a variety of flavors. Traditional ice cream in Iran is considered by many people.

This ice cream is packed with pistachios and large pieces of raw fruits and has many fans.

Akbar Mashti was one of the first to have ice cream in Iran.

Iranians preferred the use of  rose water and saffron on the fixers.

How to make ice cream:

First, brew the milk and let it cool. Then, cream, sugar and rose water were added to it. Also, plants that work on this material like salab. Then the mixture was poured into a metal mold.

They put the mold in a bundle of ice.

They took it too much to get it.

Iranian ice cream we know today are produced in the same way.

Another type of ice cream is ice mac, which is also made with juice, honey and spice.

In ancient times in Iran, snowing was common with sugar.

In the past, Faloodeh ice cream in Iran

It was made using ice, rose water, rice flour and saffron and other flavors.